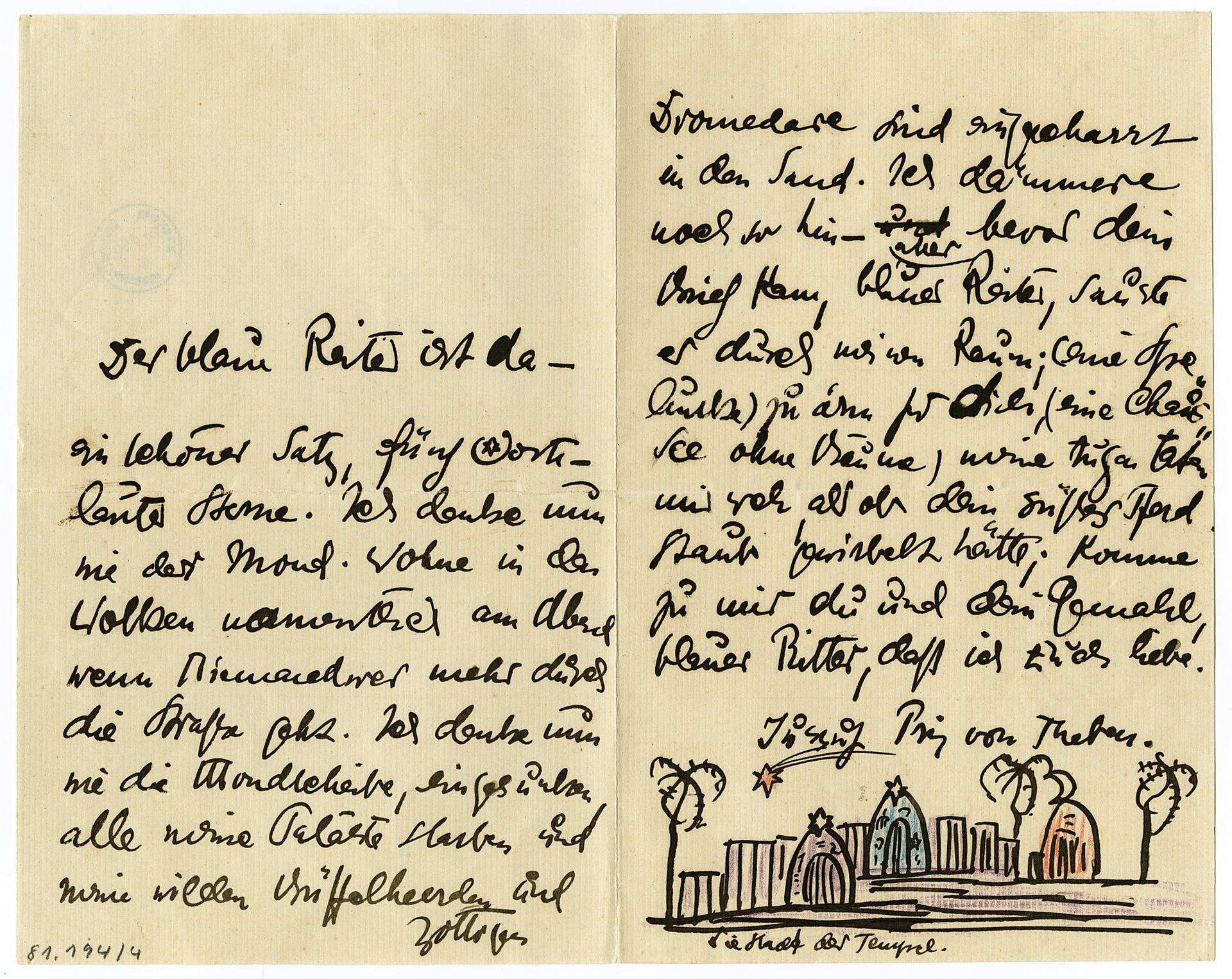 Letter from Else Lasker-Schüler to Franz Marc, December 1912

In her prompt reply to the first illustrated greeting she received from Franz Marc (1880-1916), Else Lasker-Schüler strikes a jubilant tone: »The Blue Rider is here [...] five words – all stars«. The artist had announced his arrival in Berlin on 8 December 1912 with a self-portrait in ink entitled »The Blue Rider presents his blue horse to Your Highness«. Marc’s woodcut to Lasker-Schüler’s poem »Reconciliation« (»Versöhnung«), published in the September issue of Der Sturm (1912, no. 125/126), had already prompted the poet to explore the possibilities of a friendly relationship with Marc (letter from 9 November 1912). Now, her enthusiasm is focused above all on the painter’s illustrated message in which he accepts his intended role as the blue rider at the court of Jussuf, the prince of Thebes, and joins her in her game of playfully interweaving art and life.

The artistic friendship between Marc and Lasker-Schüler quickly gained an immensely creative dynamic. At the outset, the notoriously penniless poet was gravely ill, deeply hurt and disappointed. With her divorce from Herwarth Walden she had lost not only her most treasured comrade but also the avant-garde mouthpiece Der Sturm which she and Walden had co-created. Lasker-Schüler’s disappointment is attested in her letter from 9 December, which oscillates between the real-life dreariness of her Berlin garret and the bygone glory days of the Oriental sovereign: »Nobody  (»Niemandwer«) goes through the streets any more«, all her »palaces [have] died« and her »wild buffalo herds and shaggy dromedaries [are] buried in the sands«. At this moment, however, the Blue Rider’s redemptive illustrated letter whirls through her wretched »den« and disrupts her apathetic daze. With rapturous enthusiasm the rider is raised to the rank of »blue knight« and is solemnly invited with his »consort«, Marc’s partner Maria Franck, »that I [may] love you«.

In later letters, Lasker-Schüler also addresses her correspondent as Brother Reuben or Prince of Cana. Primarily, however, Marc remains her Blue Rider, or »Blauer Reiter«, in reference to the Munich artists’ association of the same name, which he and Wassily Kandinsky had founded and which, with its highly controversial exhibitions, had become a spearhead of the artistic avant-garde. That Lasker-Schüler is delighted to welcome the long-desired fellow-in-play as a future comrade-in-arms also becomes apparent through an additional comment on the letter’s envelope, which reads: »Have already donned my ceremonial combat dress« (»Galakriegsschmuck«). Through this new coinage, Lasker-Schüler both ironises the ostentatious pomp of military dress uniforms and interweaves it with the image of colourfully painted American Indians on the warpath. It is striking to see how the characteristic, signet-like urban silhouette that often adorns Lasker-Schüler’s letters has in this case been transformed into a »city of temples«, the central one of which is rendered in blue.

The friendship between Else Lasker-Schüler and Franz Marc, his stay at the court of King Jussuf, proved to be highly inspirational for both poet and artist. In his exploration of Jussuf’s imaginative world, the small postcard format became a field of experimentation for the painter. For Lasker-Schüler, as artist and poet, Marc became her counterpart in her new novel, entitled Letters and Pictures, which she continued after Marc’s death in March 1916 and published in 1919 as The Malik. As poet and artist, Lasker-Schüler found in her encounter with Marc’s colourfully abstracting compositions a way to her very own visual language.