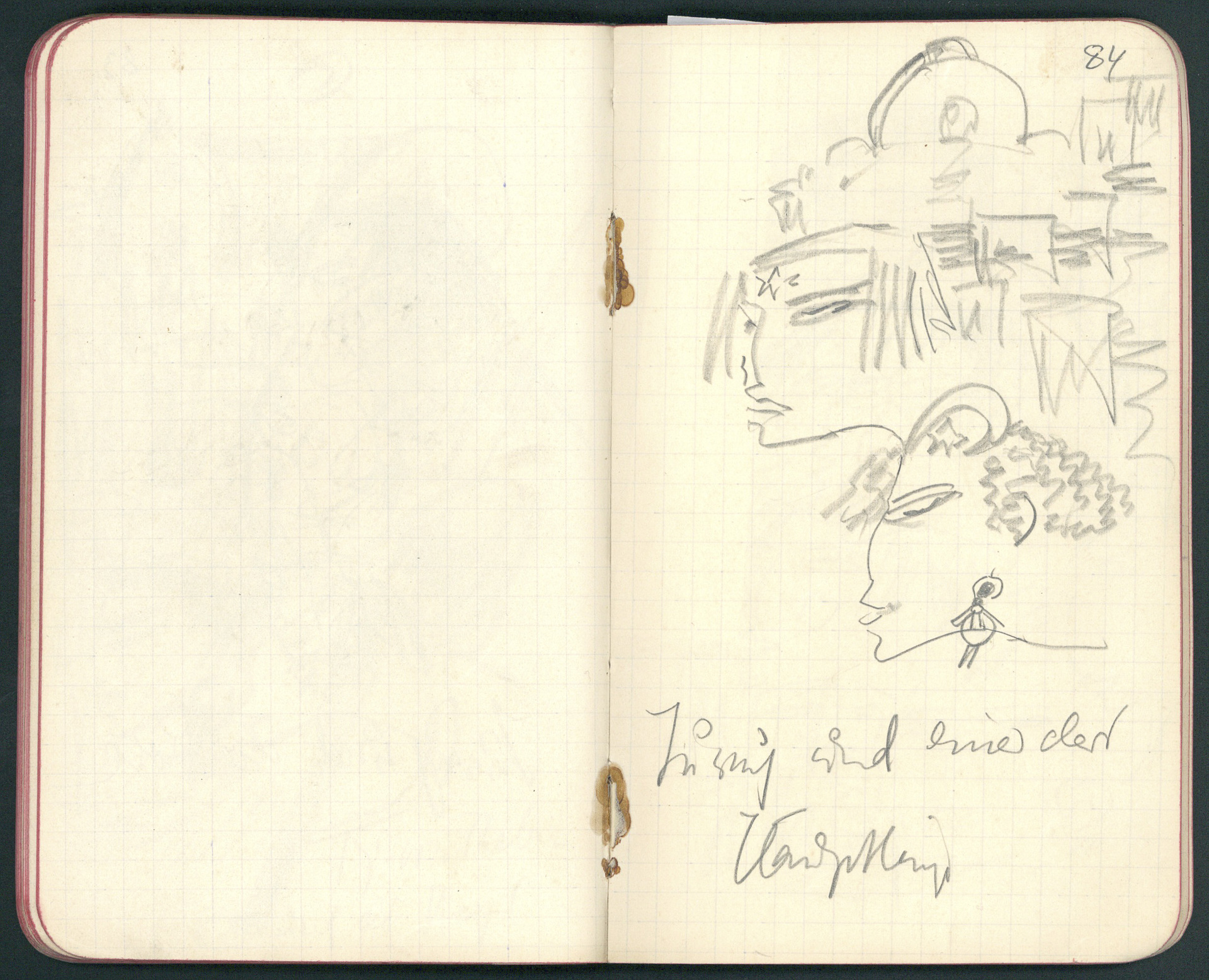 Drawings by Else Lasker-Schüler in Albert Ehrenstein’s notebook

Sometime in the spring of 1916, in the midst of World War I, Else Lasker-Schüler drove from Berlin to Leipzig to visit the publishing house Verlag der Weißen Bücher, which was to merge shortly thereafter into the Kurt-Wolff-Verlag. It was a necessary visit, as she wished to publish a volume of poetry with this publishing house: Lasker-Schüler’s Gesammelte Gedichte, which in fact appeared one year later (a second edition was published by Kurt Wolff in 1920).

The Austrian poet and writer Albert Ehrenstein (1886-1950), with whom Lasker-Schüler had an amicable relationship, lived in Leipzig at the time. His brother Carl Ehrenstein (1892-1971) was also staying there, and so the three fellow writers met for a stroll through the city, with stops at one or more cafés along the way. As usual, Albert Ehrenstein carried a notebook with him (several dozens of which are preserved in his literary estate in Jerusalem), and at some point placed it next to him on the café table. With or without his approval, Else Lasker-Schüler soon picked it up and began to draw: six small drawings in her usual style showing heads in profile, some of them with titles: »P[rince] of Thebes and the Negro«, »Jussuf and the Rose«, »Jussuf and one of the chieftains«, »My chieftains«. In between are some handwritten words that might have emerged from the conversation happening in parallel: »Walden is to blame« (Herwarth Walden was Lasker-Schüler’s second husband until 1912) and »It’s so disgustingly silly. Such impertinence against us.« We can assume the exchange was a cheerful and lively one.

It is still unclear on which day exactly these drawings were made, what the name of the coffee house was, where all of this took place. The subsequent letter, which Lasker-Schüler wrote to Albert Ehrenstein from Berlin and which she also adorned with a small drawing, is undated, but the first sentence shows that it must be connected to the visit and the drawings: »Many, many thanks for everything, how lovely it was in Leipzig, when we walked through the streets and across the squares, and how Theban the city.« In spite of all the chaos of the time, Albert Ehrenstein kept the notebook and the letter.