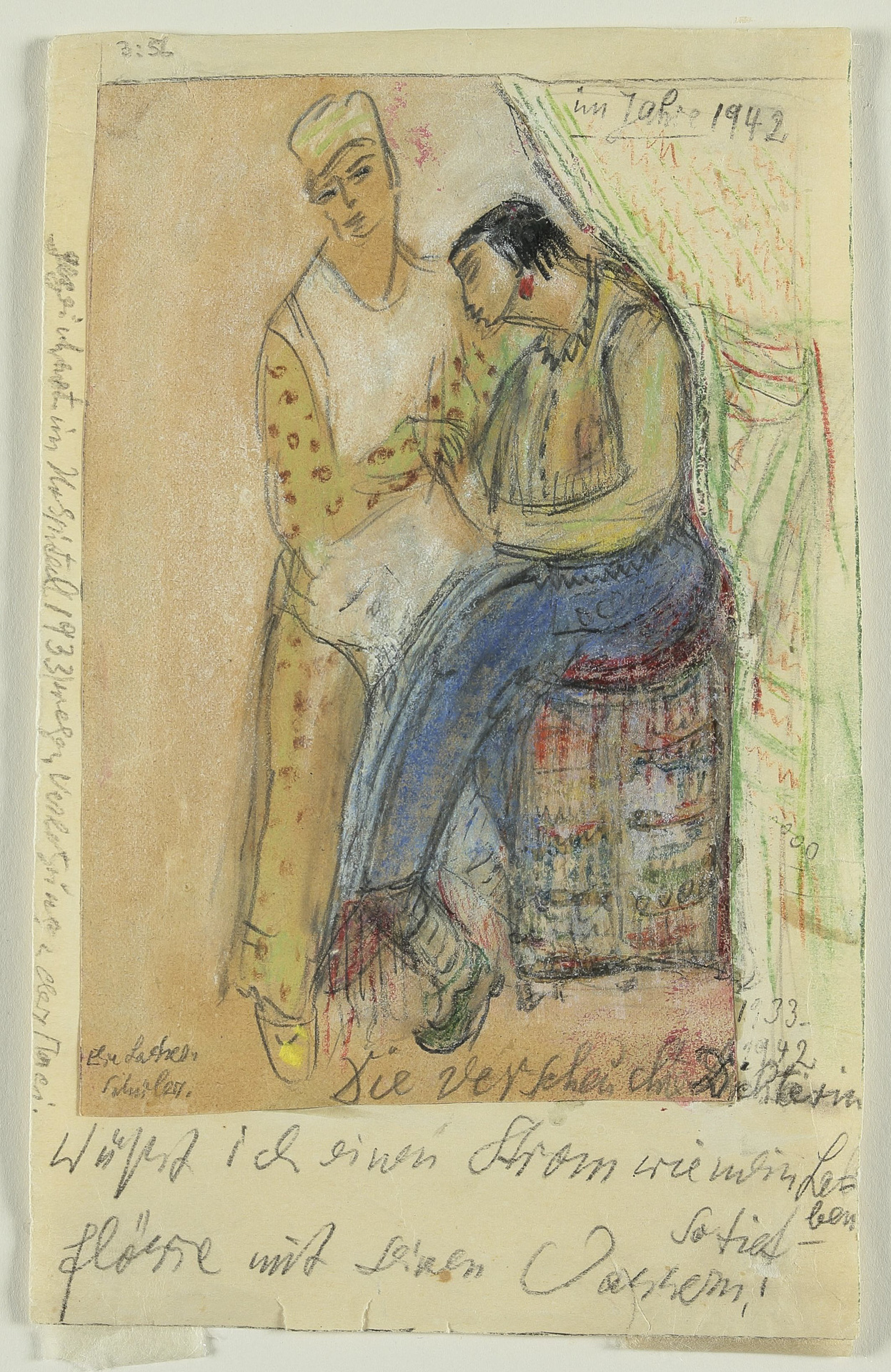 The Drawing »The Banished Poet«

For years during her exile in Zurich and later in Jerusalem, Else Lasker-Schüler was evidently occupied with this drawing, entitled »Die verscheuchte Dichterin« (»The Banished Poet«). The drawing symbolizes her situation in life, which had fundamentally changed after her flight from Berlin on 19 April 1933 and which she describes lyrically in the poem »Die Verscheuchte« (translated as »Chased Away« by Robert P. Newton, 1982), which appeared in March 1934 in Die Sammlung (Vol. 1, Vol. 7, p. 384), the literary magazine edited by Klaus Mann in Amsterdam. The first verse reads: »The day’s quite shrouded in with fog and wet. / The worlds all meet each other lifelessly – / Barely outlined, as in a silhouette.«

The foreground of the picture shows a female figure sitting on a stool with her head bent forward. A male figure standing in the background holds her hand. The facial features and haircut of the female figure are reminiscent of Lasker-Schüler’s self-portraits, which she began drawing as early as 1913. Regarding the drawing’s creation, she noted in the top right-hand corner: »in the year 1942«, in the bottom right-hand corner: »1933-1942«, and on the left margin: »drawn while in hospital (1933) because of injuries by the Naci [sic].« The year 1933 is most likely of symbolic importance, as Else Lasker-Schüler probably began drawing the picture a few years later in Zurich. When and where she stayed »in hospital« is not known. The only documentation available is what she allegedly told the painter Otto Pankok. Berto Perotti writes in his book Begegnung mit Otto Pankok (»Encounters with Otto Pankok«, 1959, p. 19): »Else Lasker-Schüler had been beaten down with an iron bar by the Nazis in Berlin and, immediately afterwards, still in a complete daze and fright, had rushed to the train station and fled to Switzerland. Completely destitute in Zurich, she had wandered through the streets and been picked up by the vice squad (›Sittenpolizei‹) while she slept on a bench in a public park. She was arrested for vagrancy and subjected to interrogation, through which the Swiss public discovered who she was.« Underneath the picture, Lasker-Schüler wrote two verses which she quoted in a letter to Ernst Simon on 21 December 1941: »To find a stream, like my life, so deep, / To flow with its waters!« The verses are reminiscent of the poem »Müde« (»Tired«) and Else Lasker-Schüler’s first volume of poetry Styx (1902). There the words »O how I long for gentle sleep« precede the aforementioned lines.